A Brief History of Wall Ties

Cavity wall construction, where two "leafs" are built with a small gap between them for insulation, was introduced to northern Europe in the late 19th Century and began to become more widespread in the 1920s. 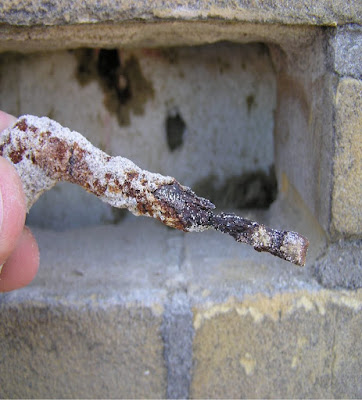 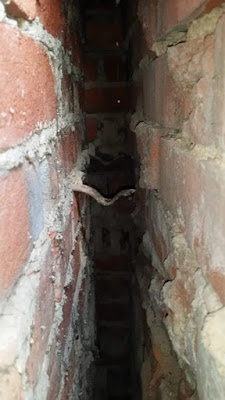 Generally, the inner leaf was a structural wall, and the outside leaf is either a weather barrier or vanity leaf. As the outer leaf is not connected to the structure (except, perhaps, at the top and bottom), the slender wall would be subjected to wind suction, so it was important to "tie" it to the inner leaf in order to create a more stable structure.

The force of wind suction can typically be as high as 2.5kN per square metre - this is over 245kg of force acting on every square metre of wall. In cavity walls where the leafs are not properly connected, high winds can suddenly cause the collapse of outer leaf masonry.

In early examples of wall tie, the two leafs were joined together using pieces of timber laid into the mortar joints, a brick laid perpendicular to bridge the cavity or steel "fish-tail" ties.

Brick and steel ties were later found to be too rigid, preventing differential movement between the two leafs. Where concrete inner leaf shrinks and a brick outer leaf expands, for example, a rigid tie would lever apart the masonry, creating horizontal cracks in the leafs.

In addition, both steel and timber ties can lose their strength over time as water penetrates the outer leaf and runs over the face of the tie. Steel ties can have their lifetime extended by giving it protective zinc or galvanised coating.

Research conducted in the 1970s found that fish-tail ties had a life expectancy of just 30 years - half of that originally intended. Stainless steel wall ties started to be introduced in the mid-1980s, but before this time the corrosion on ties was particularly damaging to masonry as mild steel can expand up to 7x its original size as it corrodes. This corrosion is often evidenced by evenly spaced horizontal cracks appearing in the outer leaf. These cracks first appear - and appear widest - at the top of masonry walls, particularly where there is little weight-bearing onto the ties; like on a gable end. The horizontal cracks are a result of the wall ties’ expansion lifting the overlying masonry.

To treat corroding wall ties, the best solution is to install new stainless steel wall ties such as Dri Flex or Retro Flex to tie the leafs together, and to isolate the existing wall ties to prevent any further damage to the outer leaf masonry.